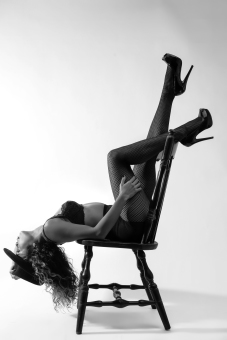 Shot out from a canon, Angela is a singer/songwriter from Las Vegas, NV. Long before storming Area 51 was a thing, Angela kidnapped an alien that spit fire out from it's finger and used him as a DJ in one of her live shows all while jumping on a trampoline singing live delivering a high energy performance. Her professional career began when MTV's Making the Band flew her out to New York to sing for P. Diddy. After not impressing Mr. Diddy with her rap skills (because after all, she is a singer not a rapper) another opportunity came along. After a successful audition for world renowned producer and creator of the Pussycat Dolls, Robin Antin, Angela toured singing backup vocals with UK's pop artist from Bros, Matt Goss. She has performed at some of the biggest venues in the world including Royal Albert Hall, Wembley, and London Palladium just to name a few. Through that run came opportunities to grace the stage singing alongside and opening for some of the biggest names including Nicole Sherzinger, Cher, and Natasha Bedingfield. She has an extensive stage performance history under her belt, opening at music festivals such as Land of Nod and Life is Beautiful alongside some of the most talented indie artists. Angela continues to collaborate with top talent in the entertainment business and is currently working on an album.

Update Required To play the media you will need to either update your browser to a recent version or update your Flash plugin.
Download Download
Back
You Tube

Let's connect, I'd love to hear from you!